In the inaugural NSW touch Junior State Southern Conference, the Hills Hornets U18 Boys and U12 Girls have been crowned champions.

The tournament saw 12 Hills Hornets teams make the journey to Wagga Wagga. Being the first year of this format, no one was sure what to expect from the event, but there was confidence in the coaching and playing ranks that their teams would do well.

After 2 days of competitive touch, 11 of the 12 teams made it through to the Round of 16. The only team not to go through was the 12 boys development but with players as young as 8 years old, they played with great enthusiasm and determination.

Of all the teams still in contention, the U12 Girls were red hot favourites, having not conceded a try over the 2 days of competition and securing an eye watering for and against of 55-0 over 8 games.

After the round of 16, unfortunately the tournament ended for the U10 Girls and the U12 Boys who were unable to get past their opponents.

The remaining 9 Hills had teams secured a top 8 spot, and a ticket to the state final in April , but there was still a tournament to win here.

In the quarter finals, despite a dominant performance from Hills Junior Club Captain, Paris Mooney, the 18 Girls went down in a close one to Parramatta.  Likewise, the 16 Girls with Premier League player, Sophie Williams also went down in a tight one. 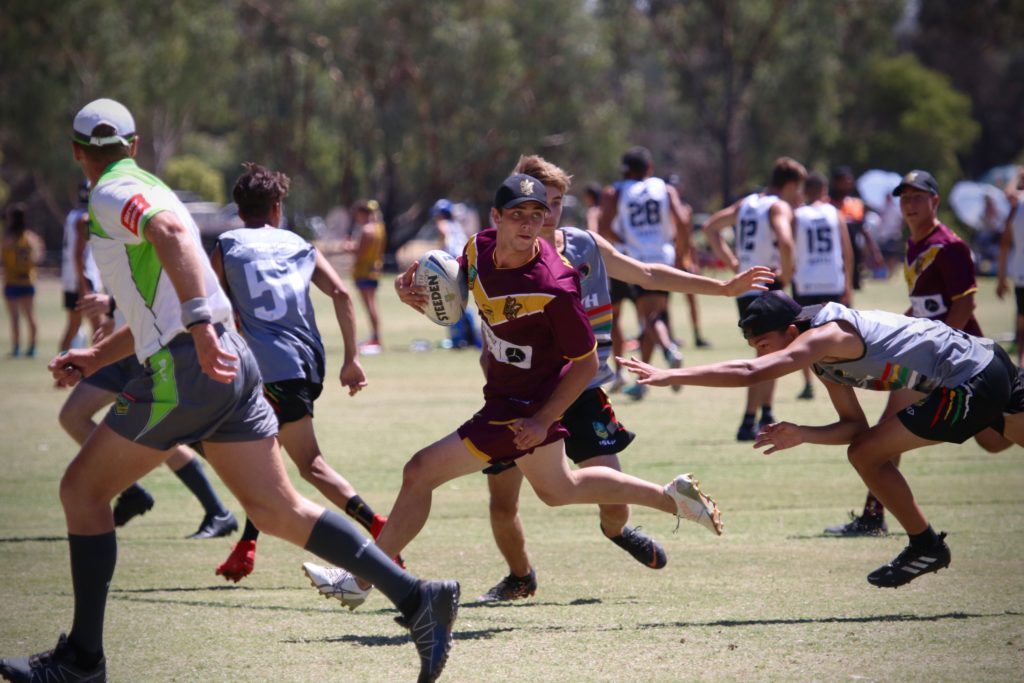 The 16 boys, 14 boys, 10 boys and 14 girls also lost their quarter finals and had to settle for a respectable top 8 finish.

The U18 Boys appeared to be on their way to an early exit when they faced Wollongong in their quarter final.  Wollongong jumped out to a 3 try lead inside the first 10 minutes of the game.  But Junior Boys Club Captain, Flynn Angles-Corke single-handedly dragged the Hornets back into the game with 3 brilliant individual tries. When Angles-Corke fired a long ball into the hands of winger Harry Fryer for the Hornets 4th try, the Hornets had remarkably hit the lead and would go on to win by a single try.

The U12 Girls sailed through their quarter final against conference hosts, Wagga Wagga, having still had not conceded a try.

The surprise packet of the quarter finals was the U8 Boys who, after winning only one of their round games found themselves in a semi-final.  Unfortunately for the U8 Boys the semi-finals would be as far as they go.

The U12 Girls got past the St George Dragons in their semi-final without too much trouble although the Dragons got to claim the honour of breaking the Hornets line for the first time in the tournament.

The U18 Boys came up against the Penrith side coached by Australian Men’s Opens Captain, Nick Good.  Despite the Hornets scoring the first try, Penrith held the lead for most of the game.  With 5 minutes left on the clock Angles-Corke once again split the defence from dummy half and fired a pass to the ever-reliable Harry Fryer who caught the ball mid-air and slammed it down just before the defence got to him.  The Hornets held on for an incredible win and secure a spot in the Final.

With 2 teams in the final, it was the 12 Girls who were up first against Orange Thunder.  They took to the field through a tunnel provided by Hornets players led loudly and proudly by our 18 Boys who took time away from their Grand Final prep to support their younger club mates. 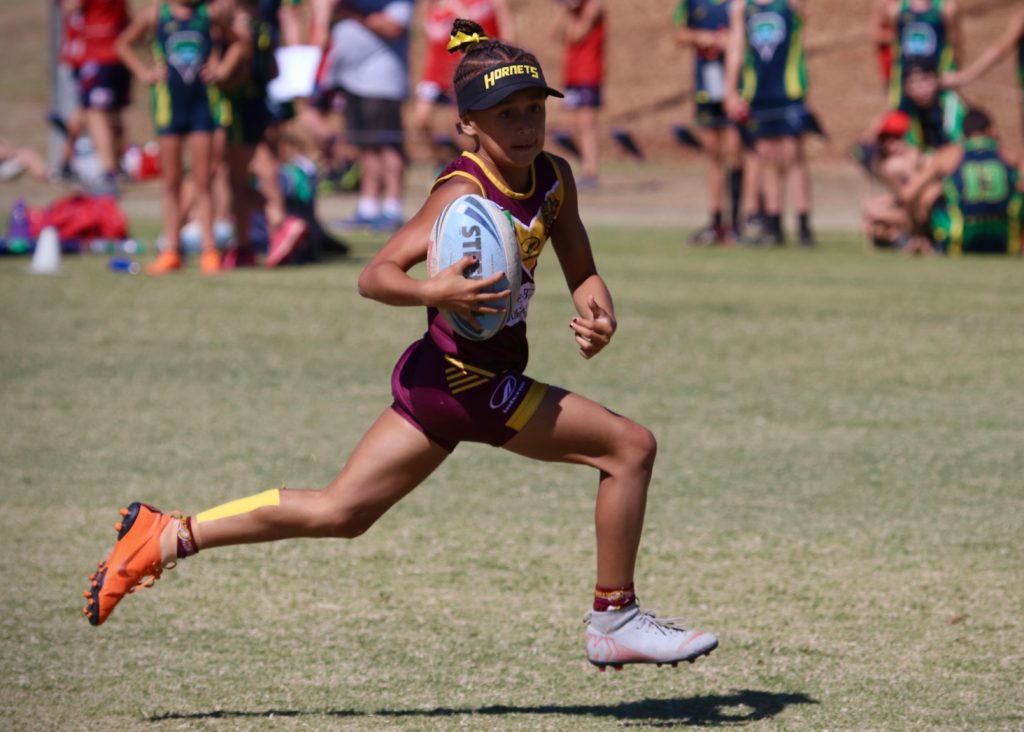 Wairia Ellis. Player of the Final

The Hornets were first to score through a slick tap off move and never looked back, comfortably taking the conference title 6 touchdowns to 3. Pocket rocket Waiara Ellis, was deservedly awarded “Player of the Final” after a rampaging performance.

“These girls have worked hard over the summer to prepare themselves for this.  Their resilience in defence shows how committed they are to each other, and when they have the ball in the hands they demonstrate skills well beyond their years.”

With one trophy in the cabinet it was time for the 18 Boys who were facing off against a Wests Magpies team that was loaded with premier league, NSW and Australian players. Wests were the red-hot favourites for the title, and when Wests’ Michael Tannous fired a bullet pass to his winger for a try in the first set of 6, it looked as though the favourites were going to cruise easily to victory. With any other team that might have been the case, but this Hornets team knows how to fight. The Hornets soon hit back with a try of their own, and in front of a packed stadium, the match turned into a highly entertaining try-for-try affair. When Angles-Corke crashed over for a try to make it 6 tries to 5 with 2 minutes to go on the clock, the Hornets had victory in their grasp. But the Hornets would need  to survive a final assault on the Hornets line from the Wests’ star-studded team. For Hornets supporters, the final 2 minutes felt like an eternity.  But the Hornets defensive team, lead by “Player of the Final” Keahlan Bray, were able to hold on.  When the siren sounded the roar from Hornets players and supporters would have been heard all the way back at Castle Hill.

The 18 Boys had achieved a result that most onlookers would have thought impossible. Coach Brad Curl could not contain his emotion when asked what this meant for the club.

“This means so much.  We have been developing these boys for 5, 6 ,7 years, and the attitude and commitment of those boys is nothing short of unbelievable”, said Coach Curl. 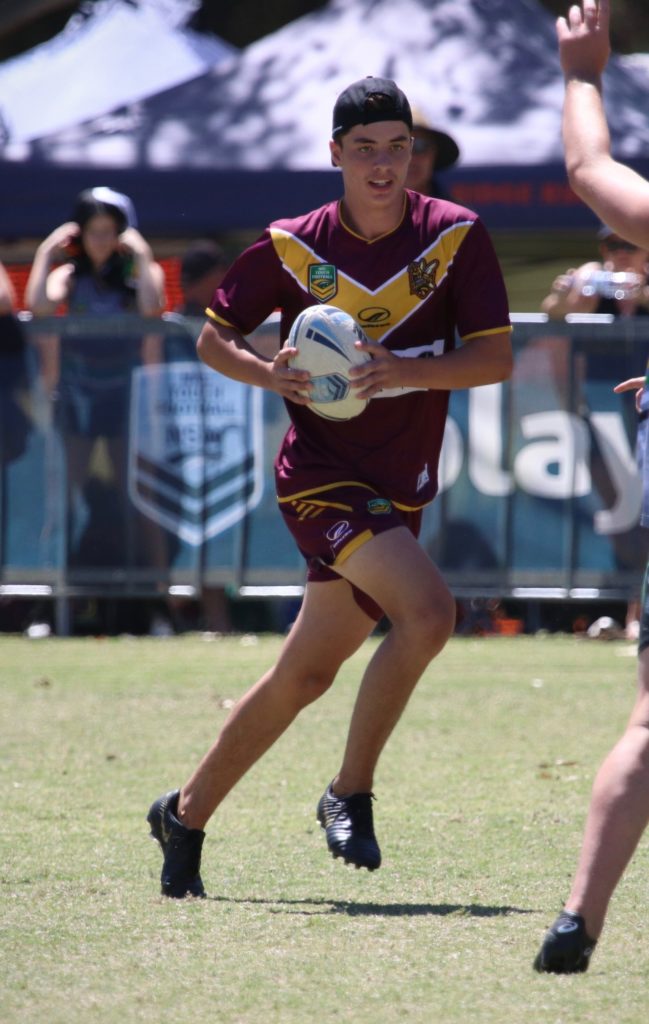 Keahlan Bray. Player of the Final

“We knew that if we run, there are not too many teams that could hold us.  Our commitment to each other, our running game, and the belief that they had in our game, is what got us the result”

Hills Hornets President, Brad Mitchell was thrilled with the outcome of all Hornets teams but particularly the 12 Girls and 18 boys.

“It is so good to see results after so many years of hard work”.

“Over the years, our coaches put so much work into the development of these players and also themselves as coaches.”

“This is not an overnight success.  We started this journey 7 years ago with a park comp of just 6 junior teams.  We have worked hard to develop our both Junior Girls and Junior Boys programs. The results show we are getting his right.  We have a championship in a boys division and a girls division, and we have 5 boys teams and 4 girls teams finishing top 8.”

“It would be impossible to thank everyone who has helped get us here.  The players deserve the credit for their commitment to training and to then execute their skills.  But we have to acknowledge our coaches at Hills.  We have a coaching roster at Hills that I’m incredibly proud of.”

The next step for the Hills Hornets is the junior state championships in April where 8 Hornets teams will take on the best teams from the Northern Conference.

For those who are interested in joining the Hornets Swarm, the club is currently collecting expressions of interest for the 2019 Vawdon Cup Campaign.
Register your interest here: https://www.hillshornetstouch.com/quiz/vawdon-cup-eoi/